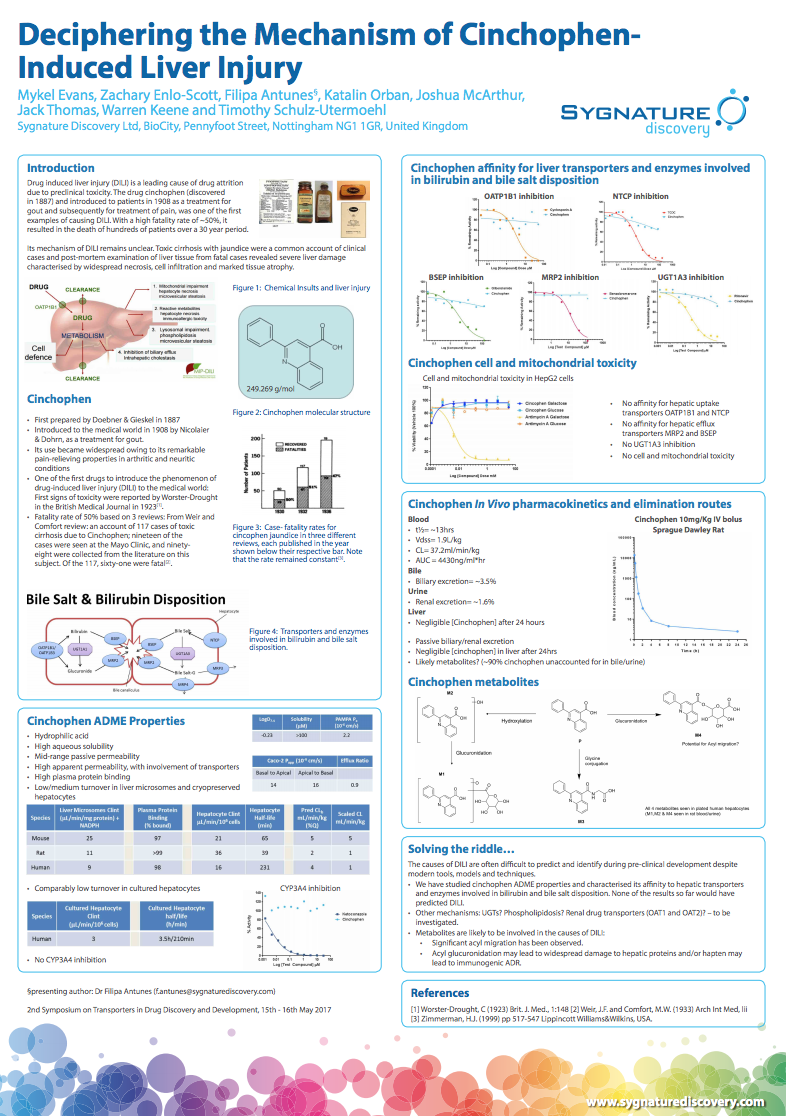 Drug induced liver injury (DILI) is a leading cause of drug attrition due to preclinical toxicity, and the drug, cinchophen, which was discovered 1887, and introduced to patients in 1908 as a treatment for gout (and subsequently for treatment of pain), was one of the first examples of causing DILI. With a high fatality rate of ~50%, it resulted in the death of hundreds of patients over a 30 year period.

To explore the potential underlying mechanisms, cinchophen was tested in a selection of modern in vitro DMPK (Metabolite identification, UGT inhibition and OATP1B1, MRP2, BSEP inhibition) and Toxicology assays (general cell toxicity, mitochondrial impairment). Metabolite profiling and identification using tissue samples from rat that had been dosed with cinchophen were also performed.

ADME properties of Cinchophen showed it to be a moderately lipophilic acid (LogD7.4 of <1) with high aqueous solubility (>100 mM free base), mid-range passive permeability (PAMPA Pe 2.21×10-6 cm/s), high apparent permeability (A toB of 16.2×10-6 cm/s), with involvement of transporters (Caco-2) and high plasma protein binding in multiple species (97 to >99% bound).  Limited in vitro metabolism of Cinchophen was observed, with predicted hepatic clearance in-line with observed in vivo clearance. The enzymes responsible for the formation of its acyl glucuronide metabolite were UGT1A1 and UGT1A3. Cinchophen caused little/no HepG2 cell toxicity or mitochondrial impairment, it inhibited UGT1A1 and UGT1A3 at physiologically relevant concentrations (Css of 9.4 mM at 50 mg/day), in both recombinant IC50 values of 3 and 3.1 mM, respectively and liver microsomal systems (IC50 values of 3 and 12 mM, respectively).  Cinchophen inhibition of rat bsep and human BSEP was observed (IC50 values of 3 and 6 mM, respectively). No inhibition of human MRP2 or OATP1B1 was observed. Based on Css/BSEP IC50 ratios, cinchophen falls within the high risk class of compounds known to be associated with liver injury.