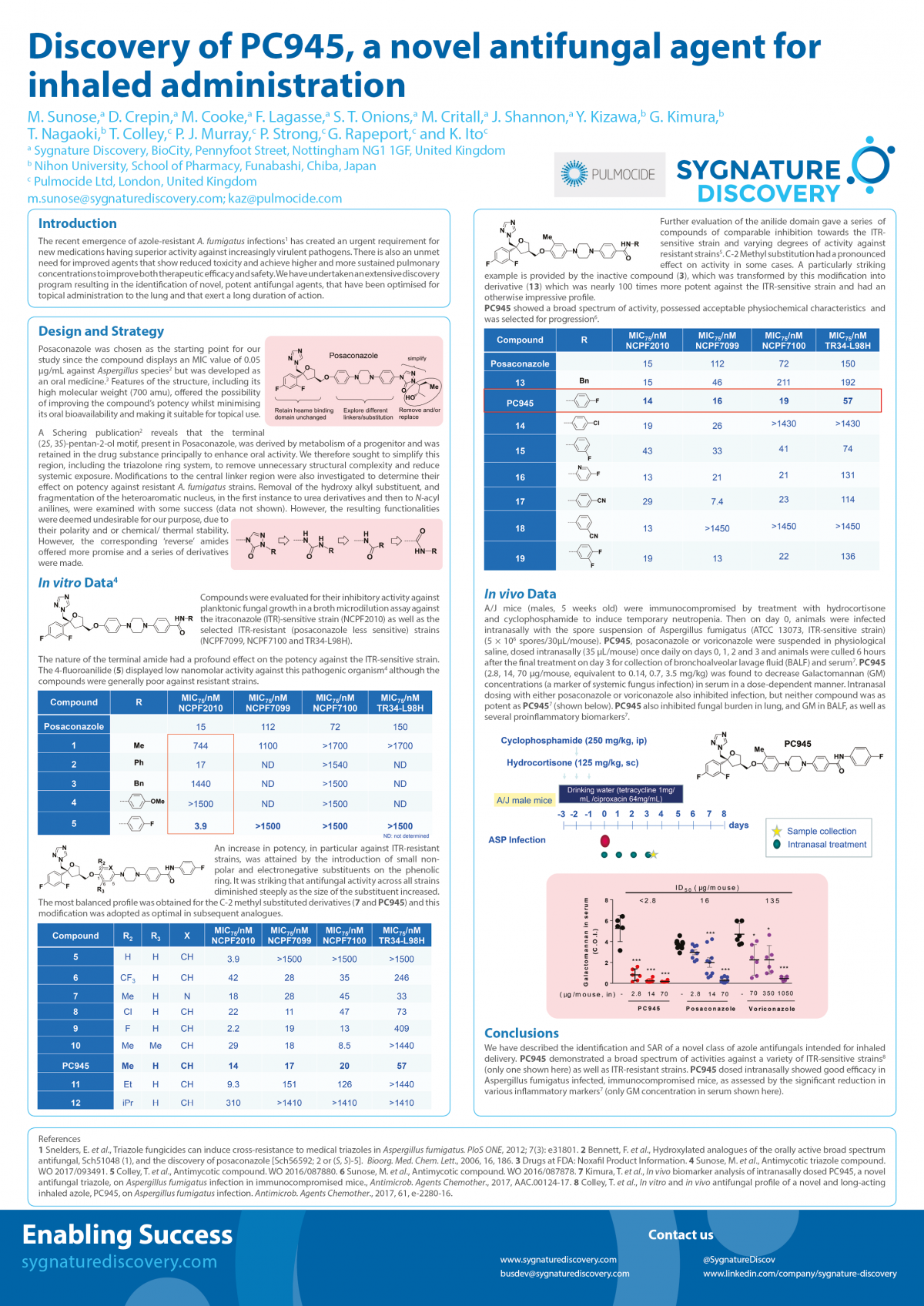 Discovery of PC945, a novel antifungal agent for inhaled administration

The incidence of fungal infections has increased substantially over the past two decades and is a leading cause of morbidity and mortality in immunocompromised patients. In 2002, almost 10,000 patients in England were estimated to have suffered a deep-organ fungal infection following otherwise successful treatments for serious illnesses; resulting in almost half of them dying1. Invasive aspergillosis (IA) exhibits especially high mortality rates in those undergoing chemotherapy or organ transplants (such as the lung). Existing anti-fungal treatments are given systemically, predominantly either orally or intravenously. These routes of delivery are poor for treating pulmonary fungal infections since the resulting drug concentrations at the site of infection tends to be lower than in other healthy organs. This disparity is particularly adverse for the liver and frequently causes triazole-induced toxicity. For example, up to 15% of patients treated with voriconazole suffer raised transaminase levels2; an indicator of hepatic injury. High exposure of triazoles in the liver also results in undesirable drug-drug interactions arising from the inhibition of hepatic P450 enzymes3. Furthermore, the widespread use of triazoles, both in the clinic and in agriculture, has led to growing number of cases of triazole-resistant pathogens in some locations4.

Herein we report the identification of novel triazole antifungal agents specifically designed for inhaled administration, leading to the discovery of PC945. The profile of PC945 has been assessed in a range of therapeutically relevant in vitro and in vivo studies. Over the duration of broth microdilution assays, the compound demonstrated potent inhibitory activity against several strains of Aspergillus fumigatus, including some with well characterised CYP51A mutations (conferring triazole resistance). In temporarily neutropenic, immunocompromised mice infected with A. fumigatus, half of the animals survived until day 7 when treated intranasally with PC945 at 0.56 μg/mouse. In comparison, posaconazole only showed similar effects (44%) at the substantially higher dose of 14 μg/mouse5. This profile demonstrates that topical invasive pulmonary aspergillosis treatment with PC945 should provide enhanced antifungal activity in the lung over currently available therapies.