Sygnature Discovery has adopted a broad range of techniques to help you to identify biologically active compounds that underline the consequences of target inactivation on cell proliferation, activation, apoptosis or cytotoxic cell death.

Cell proliferation and viability assays are powerful tools facilitating discovery of novel therapeutics. Most in vitro proliferation assays determine the number of viable cells and are based on quantifying the number of cell nuclei, metabolic activity, assessing cell redox potential or mitochondrial integrity. These proliferation assays can be multiplexed with cytotoxicity or apoptosis assays that monitor cell fate in response to compound treatment. Compound-induced cell apoptosis can be measured by an increase in cell membrane permeability, loss of membrane asymmetry or caspases activation. We rely on automated liquid handling to allow high-throughput data acquisition. This helps us to quickly validate compounds and facilitate selection for the next screening round within a Design-Make-Test-Analyse cycle. These cell proliferation and viability methods can be applied to both Phenotypic and target-based drug discovery projects. We utilize, for example:

Techniques used to measure cell proliferation, viability and apoptosis include:

Examples of in vitro assays to measure cell proliferation, viability and apoptosis. 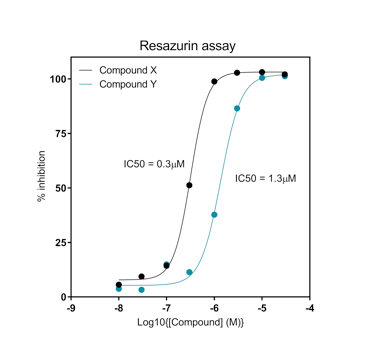 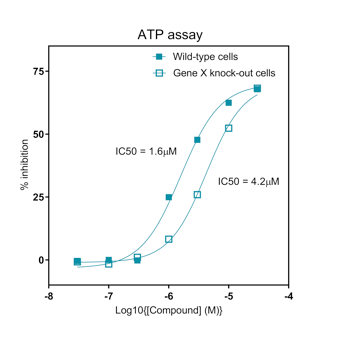 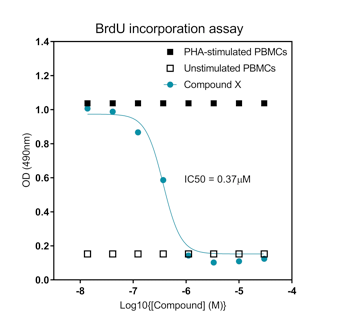 Figure C: BrdU incorporation assay with PMBCs that were left unstimulated or stimulated with PHA in the presence of selected compound. The compound reduces activation and proliferation of T-cells responding to stimulus. 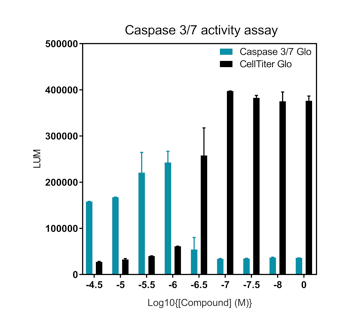 Figure D: Caspase 3/7 Glo® activities in cells treated with a compound. Data expressed in comparison to CellTiter Glo® to demonstrate correlation between a reduction in cell viability with an increase in caspase 3/7 activation. 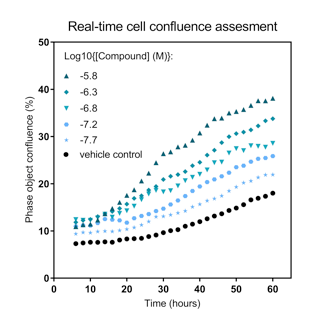 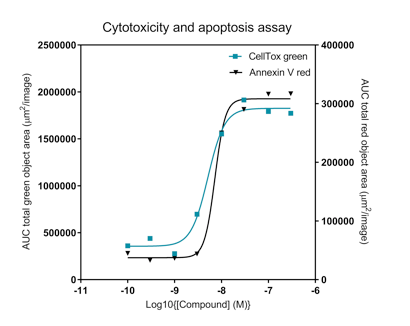 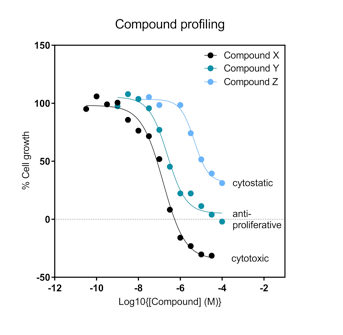 Figure G: Determination of compound effect on cell growth. The graph shows a compound that is cytotoxic (X), anti-proliferative (Y) or cytostatic (Z).

Assay formats that culture two or more cell types together can be used to provide a more accurate model of the target tissue environmental context. Our scientists are proficient at generating complex in vitro co-culture assays for your particular target area, including those for vascular branching angiogenesis assays, and phagocytotic assays.

We are able to provide heterogeneous cell population analysis through our capabilities in flow cytometry and high-content imaging, affording you the ability to assess cell cycle stages and the various biomarkers in response to your target treatment.

The stimulus-induced migration of cells is co-ordinated tightly by complex signalling networks, and development of drugs to target these pathways are important in many therapeutic areas including tumour metastasis and wound healing. We have established chemotactic assays to quantify migrated cells in response to drug treatments.

The IXM-C allows our scientists to capture high-quality images. A range of assay formats are available and are applicable to multiple phases of the drug discovery process. In addition to offering a range of formats in 2D, we are also able to screen compounds in 3D cultures. Cells cultured in 3D retain tissue architecture and cell-matrix interactions that make them display in vivo-like attributes and thus are more highly relevant in vitro models to examine…

Intracellular signal cascades are a vital network governing cell function, differentiation, and survival. We are able to offer a varied portfolio of second messenger, protein-protein interactions (PPIs), receptor internalisation, and ion channel focussed assays to elucidate the impact that your target has upon cellular signalling networks.

Phenotypic screens are run in many cells types and our bioscientists are expert in developing assays in primary or disease relevant primary cells in addition to immortalised lines.

Analysing the expression of genes and their protein products are a vital means to understand cell functionality in response to drug exposure. Our scientists have expertise in both quantitative PCR assays and detection of analytes in single (e.g. western blot) and multiplex (e.g. AlphaLISA, Luminex and Flow Cytometry) format to evaluate the effects of your target on various signalling and expression pathways.