PROTACs, or proteolysis targeting chimeras, are bifunctional molecules that bind to an ubiquitin ligase at one end and to the protein being targeted at the other.

This form of targeted protein degradation capitalises on a cell’s endogenous machinery to eliminate a target protein rather than inhibit it.

In essence, a PROTAC® encourages the ubiquitin proteasome system to mark a target protein for degradation, thereby using the body’s natural waste disposal system to remove it instead of a small molecule inhibitor or antibody.

This can help circumvent some of the challenges in developing traditional small molecule drugs, such as targeting proteins that lack active sites or driving the removal of misfolded proteins from cells, for example in neurodegenerative disease.

These and other properties of PROTACs open up the tantalising prospects of creating drugs that target many of the disease-causing proteins modern medicine has as yet been unable to tackle.

A video depiction of dBET6, a PROTAC® targeted degrader, bound in the CRBN-BRD4 complex (6boy.pdb)

We have expertise in the ubiquitin system and the wider field of protein degradation, and we’re well versed in the different assays required for PROTAC® development, especially with respect to surface plasmon resonance, a technique that can be used to examine PROTAC® ternary complexes.

In addition, we’re well equipped to assess degradation of a target of choice using different technologies, such as HTRF or our Jess system (a capillary electrophoresis assay), which is demonstrated below. 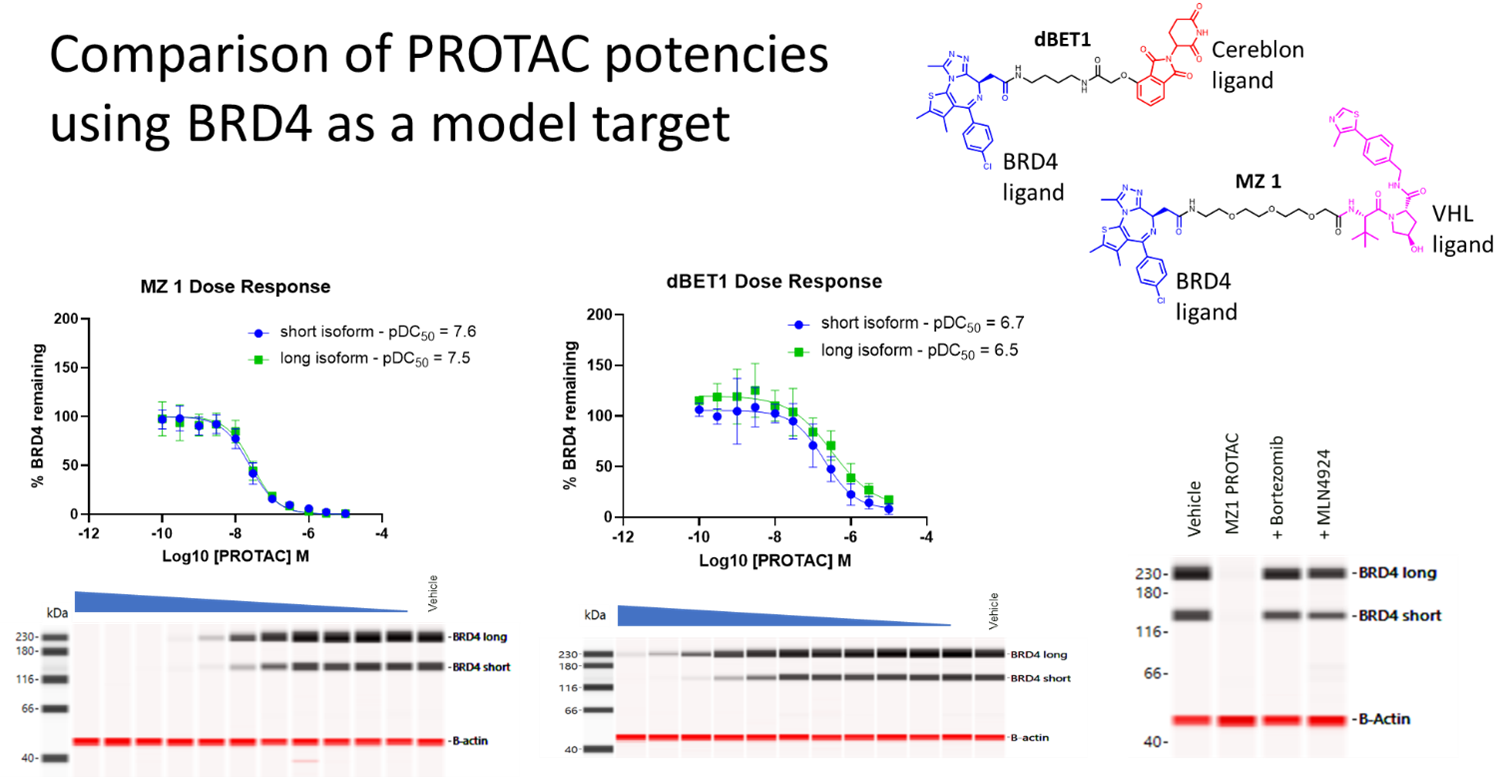 The data above compares potency, DC50 values, for two PROTACs – MZ1 and dBET1. These PROTACs both target the protein BRD4, a well-described model target for early studies of PROTACs.

MZ1 recruits the VHL ubiquitin ligase, whereas dBET1 recruits Cereblon. Using our Jess capillary electrophoresis assay, we show that these two PROTACs can be clearly distinguished in terms of their potency.

As shown above, the Jess system can also be used to confirm the mechanism of action of degrader compounds, by use of compounds such as Bortezomib and MLN4924, inhibitors of the proteasome and the Cullin-RING family of ubiquitin ligases, respectively.

Our DMPK and pharmacokinetic specialists play an invaluable role in projects involving proteolysis targeting chimera degraders, helping customers to fully understand their effects on the human body from as early a stage as possible.

Meanwhile, our computational and medicinal chemistry capabilities, our hit-finding expertise (HTS and fragment-based screening), and our broad expertise in various disease areas further strengthen our ability to help you with PROTAC® development.

Whether you need to conduct a PROTAC® PK/PD study in house, want help identifying PROTAC® building blocks or just want to talk to us about protein degradation, get in touch with us via the form below or our contact page.