Alzheimer’s disease (AD) is a devastating disease for the patient, their family and friends, and also their community and wider society. The β-amyloid (Aβ) hypothesis of AD proposes that this protein is deposited in the brain up to 20 years before symptoms become apparent. These deposits show as plaques or clumps in the brain and are a neuropathological hallmark of AD. 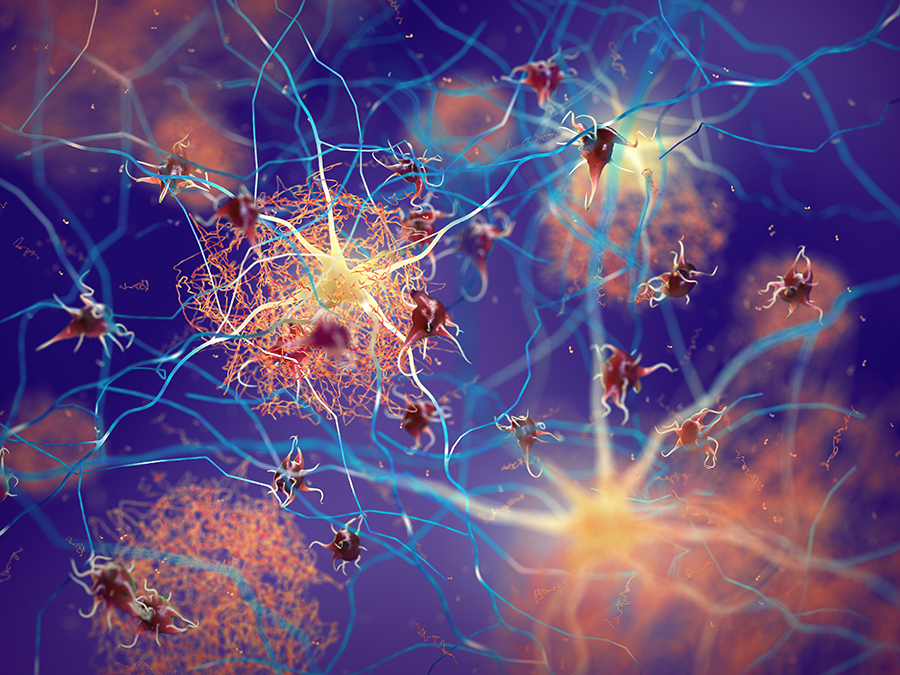 β-amyloid is thought to trigger a cascade of events in the brain, including a mass of twisted proteins inside nerve cells (neurofibrillary tangles) that occur because of an increase in the activity levels of a protein called tau (i.e. hyperphosphorylation).

This leads to the loss of nerve cells in the brain and neuroinflammation. It’s thought that neurofibrillary tangles and tau hyperphosphorylation lead to cognitive decline and other symptoms of AD.

The Aβ hypothesis has driven a major effort by the pharmaceutical industry to develop drugs that reduce β-amyloid levels in the brain to prevent the downstream events and alleviate the symptoms of AD. 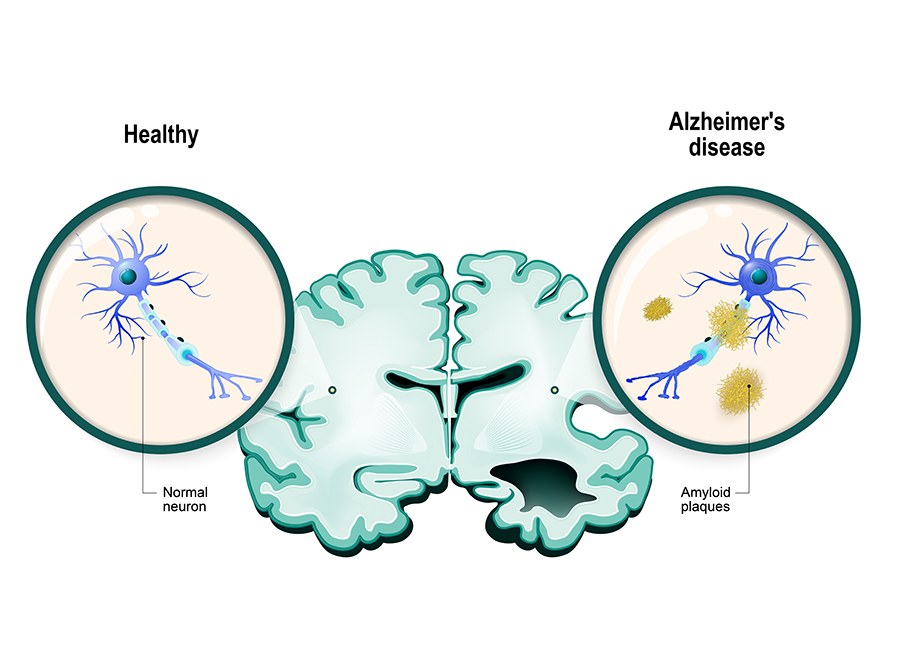 Up until 2021 the only medicines available for AD patients were donepezil, galantamine, rivastigmine and memantine. All these drugs treat the symptoms of AD, but do not alter the progress of the disease.

After a nearly two-decade wait, a new drug has been approved for AD by the FDA – based on the Aβ hypothesis.

Biogen’s aducanumab (Aduhelm) is a monoclonal antibody drug that clearly reduces/removes Aβ in the brains of AD patients with mild/moderate symptoms in two PIII trials.

What’s less certain is whether aducanumab provides convincing evidence of clinical benefit – that is, cognitive improvement.

The controversy that has erupted around the approval of aducanumab has been covered extensively by expert scientific and non-scientific literature.

Outside the specific details of the two PIII trials with aducanumab, the broader question that has arisen is why previous drugs that also reduce brain Aβ levels in AD have not been approved by the FDA; it’s worth noting that the European Medicines Agency has recently decided not to approve aducanumab. 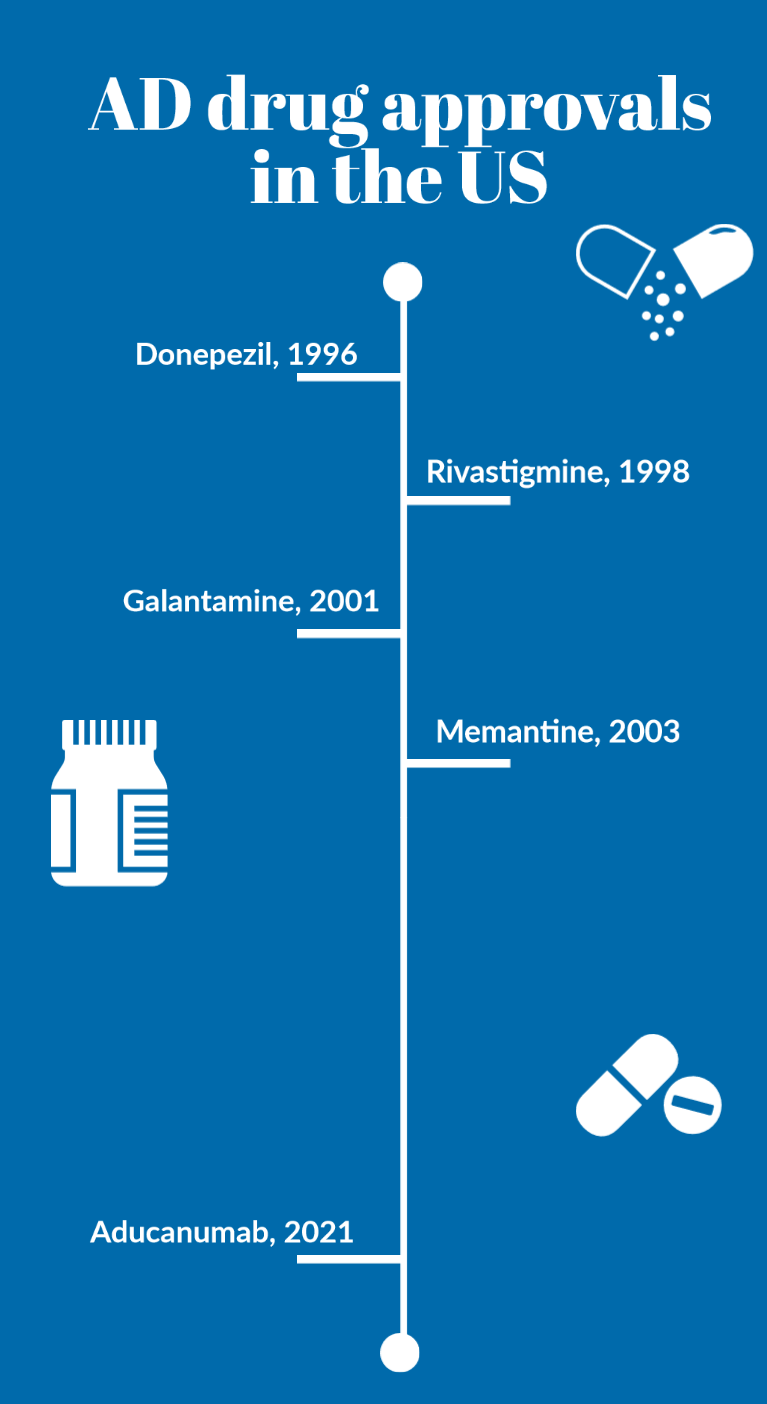 Aducanumab is the not the first or only monoclonal antibody drug targeting Aβ to have been assessed in the clinic or in development.

Previous drugs have failed in pivotal PIII trials, including bapineuzumab, solanezumab, crenezumab and gantenerumab, despite evidence of reduced Aβ levels. Other monoclonal antibodies drugs are still in development, including donanemab, locanemab and BAN-2401.

There are multiple inter-related scientific and non-scientific reasons why some monoclonal antibody drugs have stalled in development while others are still progressing.

One area of biology that’s of growing interest is the selectivity of monoclonal antibodies for different species of Aβ.

There are soluble Aβ species (monomers and oligomers of different length) and insoluble species (fibrils and plaques), with current evidence suggesting that soluble oligomers are key to neurodegeneration and disease progression in AD.

If so, then the development of monoclonal antibodies BAN-2401 and PMN201 that show higher selectivity for soluble oligomers than plaques compared to aducanumab, bapineuzumab or gantenerumab are of key interest.

Likewise, the small molecule drug ALZ-801 prevents the formation of Aβ oligomers from monomers with no affinity for plaques, and there are other efforts aimed at more specifically targeting soluble Aβ oligomers.

These are exciting times for Alzheimer’s disease drug discovery. 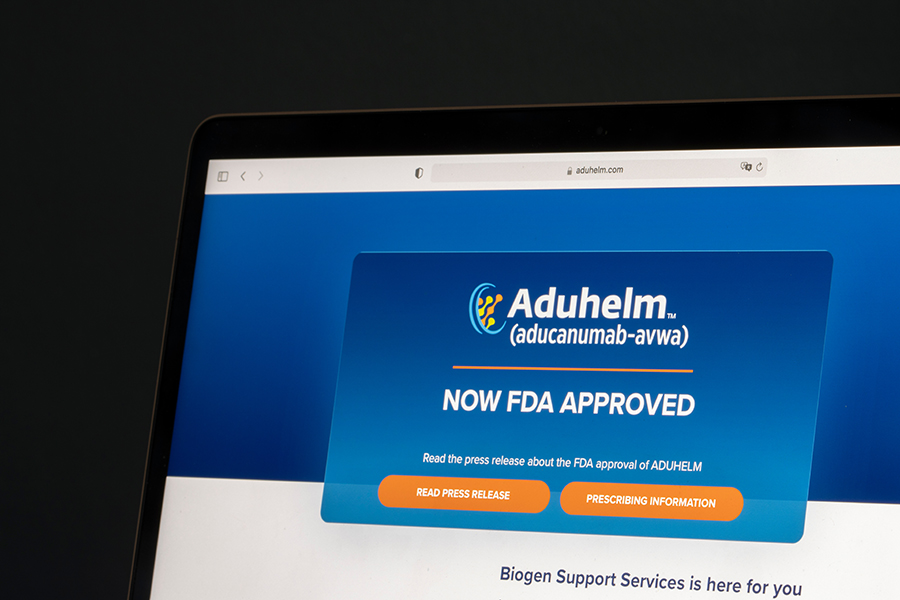 Despite the failures and controversies, the science of AD and neurodegenerative disorders (NDDs) more broadly has come a long way.

We now understand more about neurodegenerative disease mechanisms at the molecular and cellular level.

All these proteinopathies lead to protein aggregation and accumulation in the brain, and as with Aβ in AD, there are therapeutic approaches targeting removal/reduction of these aberrant proteins in different NDDs.

However, these different proteinopathies also have similar detrimental effects on cellular mechanisms and processes. These include engendering energy deficiency, impairment of detoxification mechanisms leading to cell and DNA damage, overwhelming protein homeostasis mechanisms, inflammation in the brain, overactivity of cells, and cell death.

Today, there are multiple R&D efforts focused on correcting these common cellular dysfunctions from a disease-agnostic perspective – bringing hope that novel therapeutics might be effective across multiple NDDs despite differing protein aetiologies.