When cultured as a monolayer, Caco-2 cells differentiate to form tight junctions between cells to serve as a model of passive diffusion of compounds across the monolayer. Various uptake and efflux transporters are expressed in Caco-2 cells.

Sygnature’s Caco-2 Permeability uses the CacoReady™ Kit from ReadyCell S.L. (Barcelona, Spain), a ready-to-use cell-based assay for rapid in-vitro assessment of a drug’s permeability. Differentiated and polarized Caco-2 cells (21-day system) are plated on a 96-transwell permeable system as a single monolayer to allow for automated high throughput screening of compounds. Drug transport is assessed in both directions (apical to basolateral (A-B) and basolateral to apical (B-A)) across the cell monolayer (Figure 1). The buffer used for the assay does not include HEPES, so as to minimise the inhibitory effect on uptake transporters (Luo et al., 2010).

Test compound concentrations are quantified using a calibration curve following analysis by LC-MS/MS, and the apparent permeability coefficient (Papp) and efflux ratio of the compound across the monolayer are calculated. The efflux ratio is used as an indicator of active efflux.

The permeability coefficient (Papp) is calculated from the following equation:

Where dQ/dt is the amount of compound in basal (A-B) or apical (B-A) compartment as a function of time (nmol/s). C0 is the initial concentration in the donor (apical or basal) compartment (Mean of T=0) (nmol/mL) and A is the area of the transwell (cm2).

The efflux ratio is then calculated as: 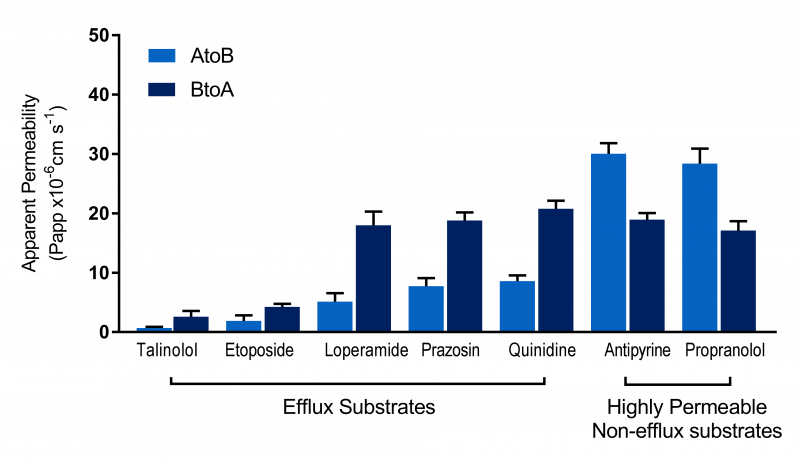 The DMPK & Physical Sciences department at Sygnature Discovery is dedicated to understanding and optimising the absorption, distribution, metabolism and excretion of drug candidates by working in close partnership with clients and other departments within Sygnature to provide successful optimisation strategies.

We have extensive know-how and expertise to provide well validated, state-of-the-art assays and a comprehensive applied consultancy service for interpretation of the in vitro ADME and in vivo PK data.

Our corporate vision is to accelerate the discovery of new medicines, from the laboratory into development to treat patients.

Our DMPK mission is to deliver tailored DMPK expertise through innovation, quality and commitment.