Sygnature Discovery > Beyond PROTACs – what’s next in target protein degradation?

Beyond PROTACs – what’s next in target protein degradation?

Significant research effort is currently being put into targeted protein degradation as a novel mechanism for treating diseases, where the idea is that inducing degradation of a disease-causing protein will have a therapeutic benefit. Instead of using a molecule that interacts with a protein to stop it from functioning, the premise is to fully destroy the protein by hijacking the cell’s own mechanisms for protein degradation.

This approach was pioneered by Craig Crews at Yale, using proteolysis-targeting chimeras, or PROTACs. And increasingly, our clients are coming to us with project ideas in this field. Dr Roland Hjerpe from Sygnature’s Bioscience department outlines his thoughts on what’s next in targeted protein degradation with a focus on a couple of promising features in the ‘TAC family’.

While PROTACs rely on exploiting the ubiquitin-proteasome system to degrade culprit proteins, alternative approaches making use of other cellular degradation systems have been recently reported.

One of these alternative strategies is being developed by Carolyn Bertozzi’s group at Stanford. Her lysosome-targeting chimeras, or LYTACs, involve the fusion of an antibody to a synthetic glycopeptide ligand. While the antibody can be selected for a target of choice, e.g. a disease-causing protein, the glycopeptide binds to a specific cell surface receptor (CI-M6PR) which mediates internalization and degradation of the antibody-bound protein via the lysosomal pathway.

Another approach is based on autophagy-targeting chimeras or AUTACs. These rely on the autophagic degradation pathway inside the cell, where small membrane-bound vesicles form and engulf material for degradation, again via the lysosome. The group of Hirokazu Arimoto at Tohoku University in Japan has taken advantage of this process by utilizing an “autophagy-tag” – a small molecule shown to induce selective autophagy. AUTACs rely on this autophagy-tag to contact the autophagy system, while the other end of the AUTAC binds to the protein to be degraded.

PROTACs are currently being evaluated in the clinic, and there is a lot of interest from drug discovery groups in the other ways in which proteins can be targeted for degradation. In contrast to PROTACs, an approach such as the LYTACs would in theory be able to target proteins outside of the cell, such as secreted cytokines – something that PROTACs would not be suitable for. Successful targeted degradation of proteins outside of the cell opens up exciting possibilities for treating disease, such as inflammatory conditions. A potential downside with LYTACs is that they are unlikely to act catalytically in the same way as PROTACs, since the antibody is degraded alongside of the targeted protein. It will be interesting to see if future LYTAC derivatives will substitute the antibody moiety for a traditional small molecule handle.

AUTACs, on the other hand, while limited to the inside of the cell, also have potential with their ability to remove larger insoluble material, such as fragmented mitochondria, from a cell. Although it remains to be demonstrated, AUTACs may also be able to degrade protein aggregates which would open up for their use in neurodegenerative disorders. While an exciting modality, a potential drawback with AUTACs is that they would not be expected to function within the cell nucleus, since the autophagic system is not active there. 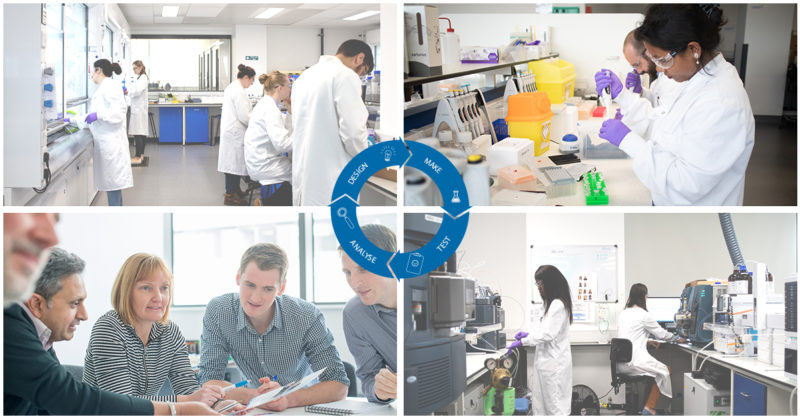 From a synthetic point of view, it is likely that LYTACs and AUTACs will be easier to make than PROTACs, as the precise spatial organisation between the protein and the degradation mechanism is probably less important. Targeted protein degradation is a fast-moving field, with enormous potential for delivering transformative medicines for patients, and as results appear in the next few years, it will be exciting to see whether this potential will be realised, and which of the different approaches will succeed.

We continually engage with our industry on a range of drug discovery topics. If you would like to discuss our bioscience capabilities or drug discovery in general then we’d love to hear from you. You can get in touch by using any of the contact forms.