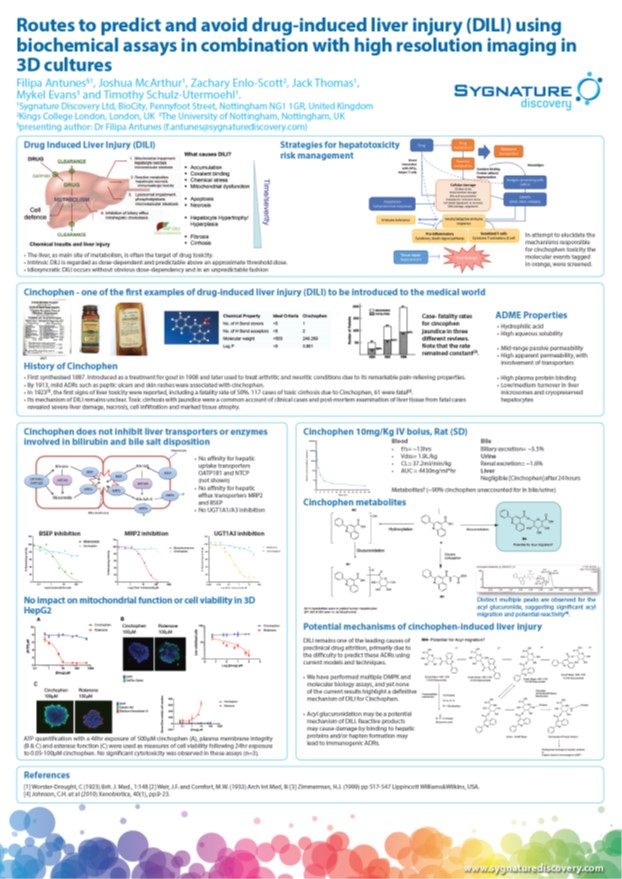 The cost impact of late-stage failures of drug candidates has driven the efforts to develop, validate, and implement a more proactive testing paradigm, including an emphasis on carrying out predictive in vitro toxicology studies earlier in the discovery process.

Using cutting-edge technologies, we attempted to identify and understand some of the cellular, biochemical and molecular basis by which compounds such as fialuridine and cinchophen exerted toxic effects and caused drug-induced liver injury (DILI). Despite their toxicity, these drugs reached the market and were responsible for several fatalities.

Mechanistic studies were conducted to identify potential DILI hazards associated with these and other toxicants. We performed a battery of in vitro experiments including covalent binding burden (CVB) tests, hepatic transporter inhibition, mitochondrial toxicity, and liver toxicity. In vivo toxicity studies in rat were also performed.

Immediate results did not suggest these compounds to be of concerned. Unlike fasiglifam or troglitazone there were no real signs of acute toxicity associated with cinchophen and fialuridine. This is worrying because it means many compounds will escape our systematic tests and efforts to identify liabilities at early stages. However, a more in-depth investigation into the metabolites of such compounds shed some light into the routes of toxicity. In combination we have also improved the sensitivity and specificity of individual assays which helped to improve the overall predictability of DILI during early drug discovery.

With these learnings combined we built and validated a strategy to integrate a matrix of assays of differing mechanistic pathways, developed for the assessment and ranking of potential DILI.