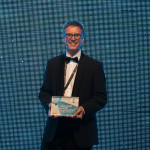 Dr Simon Hirst, Founder & CEO of Sygnature Discovery, is the Royal Society of Chemistry’s ‘Chemistry World Entrepreneur of the Year’ 2016.

The award was given for his entrepreneurship in UK Life Sciences and founding Sygnature Discovery.

Simon was presented with his award at an awards ceremony in London on 15th June 2016, hosted by television personality Hugh Dennis.  The awards ceremony formed part of Chemistry Means Business, a two-day event for the chemistry-using industry, organised by the Royal Society of Chemistry.

“To receive this prestigious award is a huge honour.

When I started Sygnature in 2004, with just 4 chemists, I couldn’t have predicted our success.  Today we have reached 150 employees and have customers across the UK, Europe and the USA.

Our client collaborations have resulted in clinical compounds which are now being evaluated for serious illnesses such as respiratory diseases and cancer.  We are very proud of our scientific achievements and it is very rewarding to receive this public recognition.”

The Chemistry World Entrepreneur of the Year award is given to individuals who demonstrated creativity and vision, driving chemistry innovation to commercial success for their business.

Dr Robert Parker, Chief Executive of the Royal Society of Chemistry said:  “It is an honour to recognise the illustrious achievements of our prize and award winners in our 175th anniversary year.

We were founded in 1841 by a group of academics, industrialists and doctors who understood the power of the chemical sciences to change our world for the better.  Our winners share that vision and are advancing excellence in their fields, whether through innovative research or inspirational teaching and outreach.

We are proud to celebrate and support the work of inspiring and influential individuals, whose work has the potential to improve so many lives.”

The award winners, who all work for companies in the chemistry industry, are chosen by a panel of senior scientists and executives from industry.  Winners are selected for their contribution to innovation and commercial success, as well as their impact in the industry, in the early stages of their career.

An illustrious list of 47 previous winners of the Royal Society of Chemistry’s Awards have gone on to win Nobel Prizes for their pioneering work, including Harry Kroto, Fred Sanger and Linus Pauling.